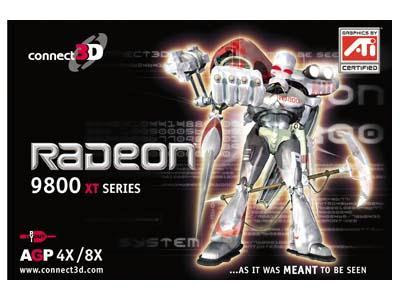 This guy multi-tasks hard. Like, so frickin hard. Your "ALT+D,F, F" Excel shortcut is like nothing to him! He spits on your Outlook 'Ctrl+Shift+M' and your regular 'Windows Key + M'. Uhhh, Alt-Tab? Who the efff are you thinking you can even mention Alt-Tab around this guy? Come.....On....Alt-Tab. Can you even conceive of looking so hard while simultaneously crunching all of those numbers in the background?? His built-in vicious accounting stamp and huge Fist/Pen are just waiting to put a fat X on your W-2.

He's kind of like Inspector Gadget in that regard - but, like, imagine if Inspector Gadget had slain the Archangels Gabriel and Tyriel in the Chrono-Ether, eons before the time of mankind - indeed - before the genesis of time itself and stolen their very Halos and forged from them an exo-suit of Indestructible Destruction and Amortization of Unused Assets.

Oh man. That art is intense. It took me 43 hours to write this post because I spent the first 42 of those hours cowering under my desk. Every time I peek out around my cube a MASSIVE steel fist seemingly appears from nowhere and threatens to smash my face in!

Ahhhhhhhh my beautiful face! Gahhh! Oh. Shit. There isn't a huge deadly Pen/Fist flying at me! Its just this epic Robotic Angel of Death on this box art. Whew. The only way to successfully write this post was to keep the blogpost-typing window (that's blog-tech nerd for a window where you type your blog post) scrolled way down so that I don't catch any glimpses of this terribly realistic assault.

Let's do the score quick because I'm about to have a breakdown:

What??? This doesn't defeat that lame Minotaur Ruben?? I'm petitioning the board.

I really wanted to give points for the Matrix-Style numbers floating around everywhere, but I'm the Scalia of Videocard box art - letter of the law, not intent. You might say "but couldn't they be interpreted as 'wireframe' or 'energy'??? Yeah, and the right to privacy is the right to abortion you baby killer.
Posted by Numerator 1 comment: 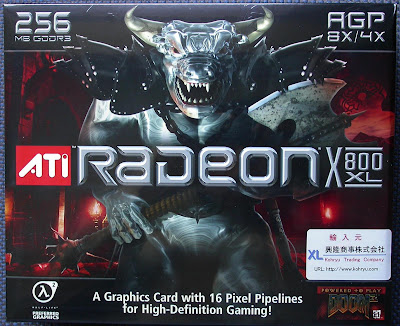 Wow. The crazy bovine-phobia the artist behind this box suffers from is practically off the scale.

Now, I know some of you reading this are gonna say "no, that's just a minotaur." -- and to address that, I've created this short play starring me, as myself, and you as the whiny mythology nerd.

[At this point a large and angry gazebo crashes on to the stage and eats your stack of D&D character sheets, your GURPS manual, and your bag of non-standard dice.]

You: Gazebos don't eat! They're a (often octagonal) pavilion structure found in gardens and parks!

[I laugh as the gazebo sits on you and makes you take it back.]

Whatever nightmarish cow-related experiences the designer of this box suffered from as a child were probably pretty horrific. And hilarious, cuz I mean, c'mon... crazy axe wielding vampire cow? HA!

He looks like he's dressed up for a GWAR concert. In fact, I'm pretty sure that's just the guitar player.

Let's score this baby. I have a good feeling about this one.

Which gives us a kickass score of 12!

Well done ATI! Your artistic livestock nightmare vision has paid off. I'm sure this baby is flying off the shelves at this very moment.
Posted by Unknown 2 comments: 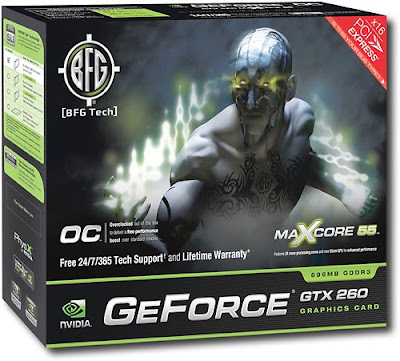 When some people think of really really baddass videogame elements to put on a box that will really inspire consumers and move units, they think of Emo Superheros. Enrique, the male model above, is the go-to industry guy for GeForce whenever they need a wizard or superhero with tribal tattoos and poorly proportioned hands.

Enrique is all business on the set. Cameras roll and he immediately begins crying his trademark Shiny Magnetic Tears into his tiny, tiny hands - all while looking completely inconsoleable. He's a total Pro.

Given his tribal tat and shredded delts I'm about ready to confirm the rumor that Enrique started his carrer in the film House-Boat Studs #7 - not that I would watch that but I heard it from somebody don't judge me you are reading about fantasty art on computer hardware boxes.

As far as giving this card a place in the pantheon of Video Card Box art - there were some tough calls to be made. I, for one, am extremely partial to shiny tears and I think they are pretty badass. He also has a kickass helmet with a secure looking chinstrap to ensure that it never comes off in combat or while headbanging to "Fallout Boy." A lot of hard work went into rendering those biceps, and I'm currently pushing the Video-Game Box-Art Judging Association to add "rad biceps" to the scoring card. But, for now, here are the results:

Although tied with the Asus Baddass D&D Skeletor Knight Warrior of Total Badness, this piece is a mediocre work salvaged only by excessive energy usage and X inflation. I predict not a crowd favorite.
Posted by Numerator 1 comment: 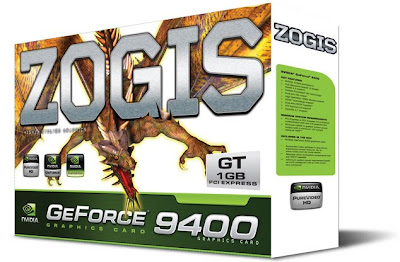 Oh ZOGIS, how do I love thee? Other graphics card boxes may change their content, they may opt for a sexy girl in a metal bikini, or a cyborg amphibian, but not you ZOGIS. You have found a formula for getting a solid score of "2" every time.

Dragons. Every single box. Not always the same dragon of course, that would be lame. Nope, different dragons for different cards, but that's it. No werewolf. No wizard. No castle. No maiden in distress. Just dragons.

Sometimes they swoop down upon some unsuspecting prey just below the edge of the box (look out Linksys WRT54G Router!)

Sometimes they charge right out of the box towards you, that reptilian eye fixed upon you. Gleaming teeth and claws poised for ripping you apart. "Buy me and cram me in your home computer or I'll rip your fucking lungs out! BREEEEAAAAAWK!" Yeah!

I could probably dedicate an entire sub-blog solely to ZOGIS dragons, but I won't. We'll just stick with this guy for now.

Let's see... he's orangey, hes' swooping down, he's um... got some sorta feathery lookin' action going on in the back there... he likes long walks on the beach, the History category of Trivial Pursuit, and he's allergic to peanuts. We'll name him Raul.

The scoring breakdown:
+2 for a Dragon 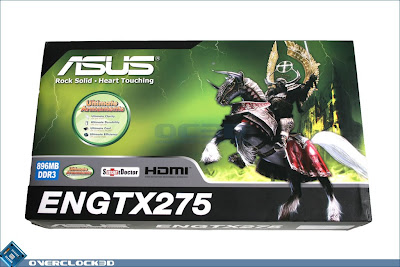 Asus is not normally a name one thinks of when you hear the term "videocard", but the great thing about video cards is just about every computer hardware manufacturer out there has produced at least one or two graphics cards in their day, which means we won't have to limit ourselves to ATI and nVidia! hoorj~!

The artwork on this one is pretty badass. I mean it's basically a D&D artists reworking of Skeletor... with perky cross-laden golden angel wings. Perhaps he's decided to join the crusades in the holy land?

Enough about Skeletor. Let's turn our attention now to two very fascinating points on this box. I'm talking of course of the words Heart and Touching. They're arranged right next to one another rather prominently right under the massive Asus logo, which implies that they're intended to be read together like a statement. "Heart Touching" -- y'know, like children's books about bunnies who sneak into Farmer MacGregor's carrot patch, or stories of how a child will donate their kidney to save a dying sibling.

Let's rate this guy:
+2 Armor (the horse is wearing some too, afterall)
+1 Weapon
+1 Lightning
+1 Fictitious Monster
+1 Clouds (I guess that green glowing stuff is a cloud? maybe it's the Aurora Borealis?)
+1 letter X

The horse is giving me a bit of a dilemma. It's not a predatory animal, despite it's badass horn helmet and it's being used as a vehicle, essentially, which makes me wanna give it at least +1 for the "vehicle implying power" category... but I'm not in a giving mood after that whole "Heart Touching" fiasco.

Not bad, Asus, but seriously, get a new tag-line.
Posted by Unknown 2 comments: 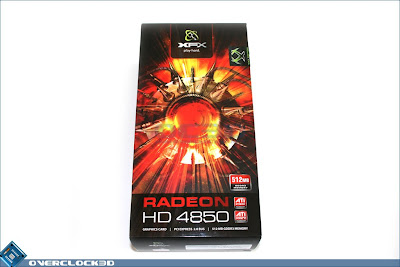 I'm not really sure what the artist was going for here... Is that some sort of space morning star? Perhaps some kinda space version of a water mine? The übergoth cousin of HAL from 2001? Whatever it is, it looks like getting near it would result in horrible explosions or lasery red death. Though it also looks like it'd be fun to ride around inside it.

Let's tally this one up:
+1 Spikeball
+1 Energy burst
+1 Weapon (I'm giving the benefit of the doubt that it's not a friendly evil glowing red space spike ball mine)
+2 uses of the letter X (I'm not going to count the X in "PCI Express")

Not bad, but I'm sure we can do better. C'mon ATI! Man up!
Posted by Unknown No comments:

I'm a scientist, and as such I'm faced with the difficult problem of applying objective values on something as amorphous as art. In order to effectively compare Videocard Display Box art, I will first establish some criteria through which I can give a quantifiable score to any given example.

A general survey of my colleagues has resulted in the creation of the following scorecard (see below), which will be applied to every piece of artwork. One point will be awarded for every instance of every category example present.

Pretty much everyone knows that the tech industry is rife with competition. Particularly between rival companies that make the same damn thing. (Think Coke vs. Pepsi)

When it comes to computer tech hardware, video graphics cards are a heated competition. ATI and nVidia are locked in a constant battle for hardware supremacy to have the highest framerates, biggest resolutions, the most onboard memory, and sharpest 3D graphics in the world. Winner gets the bragging rights that come along with it (for a few minutes, anyway, until the competition takes the lead again.)

This site isn't about any of that.

Beneath the nVidia vs. ATI competition is another competition. A more basic competition which requires no technical knowledge whatsoever.

I am speaking, of course, of the epically ridiculous artwork which decorates virtually all graphics card display boxes.

It is my intention to dedicate this little space on the blog-o-blag to the categorical study of the quest to have the most fire-breathing 3D dragons riding monster trucks while doing battle with scantilly clad warrior women per square inch.
Posted by Unknown No comments: