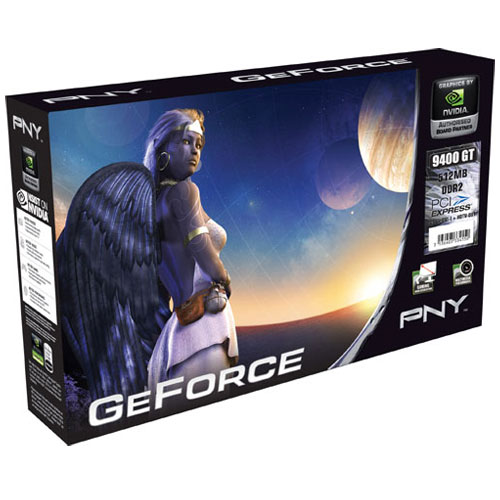 The PNY GeForce 9400GT. The "softer side" of the video card industry. Not a weapon or fanged beasty in sight! Unless of course that's a vampire-level-9-elf-angel-space-alien-princess-healer-mage. Can't tell, since her mouth is shut in that Mona Lisa smile. She needs a good fantasy name. Harnessing the power of the webotubes, I have generated a name for her. Henceforth, she shall be Jajaqa of Fairlight!

I think it's safe to say that the binary planet action going on in the background there would likely rip apart any stable orbit system. Jajaqa might wanna think about evacuating whatever rock she's standing on. She looks like the sorta gal with easy access to a spaceship. Maybe one powered by some hawt steampunk olde tyme lookin' propellers and some sort of blimp/zeppelin things. Yeah. One thing's for sure, she's lookin' mighty lonely there. No other life in sight. Not even shrubs. Hey Jajaqa, get some freakin' house plants!

PNY is clearly hoping that lonely gamer dudes will be overcome with the need to keep Jajaqa company on that desolate rock. What better way to do that than through the purchase of a video card?

Let's rate this box, shall we? I have a feeling this isn't going to do so well...

+1 wireframe -- There's some sorta wireframe thing up in the sky there. Perhaps holding the sky up?
+2 spheres -- I count two planets. For those of you arguing to include Jaiaga's breasts, get your own blog.
+1 fictitious "monster" -- she's not particularly monsterish, but she has wings. It'll hafta do.
+1 rendering of hot chick
+1 weapon -- is that thing on her belt a flask or a grenade? We'll give her the benefit of the doubt and say that on Fairlight they drink explosives.
+1 Energy burst -- ok, it's probably just the sunrise, but whatev.
+1 Clouds -- they're faint, but they're in there.

... and a shocking disuse of the letter X! NONE AT ALL. Shame on you PNY.

I'd say that's a very generous 8 too. Jajaqa is never gonna make it in this biz unless she ups her game.
Posted by Unknown